The Beauce region with its infinite spaces, an ocean of wheat, seduces those who take the time to observe. The Wheat Route in Beauce, a themed tour, encourages the discovery of this unexpected and unusual territory dotted with windmills, castles, manor houses, painted churches, farms and windmills.

Discover the horizons of Beauce from the skylight of a windmill and relive the life of the millers! Here is a selection.

The Moulin de Frouville-Pensier in Ozoir-le-Breuil is the last working windmill in the Eure & Loir, built in 1826 and restored in 1991. It is a large stone mill which has retained its 21-metre wide canvas wings, stone millstones and sow's barn. Emile Zola used to say that it is "a lighthouse in the ocean of wheat".

The Moulin du Paradis in Sancheville is a pivot mill built in the 17th century. Its last miller had the wooden shaft replaced by a steel shaft with a metal head and a cast iron impeller. The mill stopped grinding in 1946. It was completely renovated in 1995 and has been listed in the Supplementary Inventory of Historic Monuments since 4 July 1988.

The Moulin de la Garenne in Ymonville is a wooden pivot mill on a stone tower built in 1836 and classified as a Historic Monument on 26 July 1988.

The Grand Moulin in Ouarville is a pivot-mill classified as a Historic Monument on 30 September 1941. It was restored in 1958, dismantled and rebuilt in 1982. It is the largest wooden mill in Beauce.

The Richard Mill in Bazoches-en-Dunois is a pivot-mill rebuilt with parts from other mills. It is equipped with Berton wings that drive two impellers and two pairs of millstones. The mill has been listed on the Inventory of Historic Monuments since 4 July 1988. It can be visited.

The Moulin Pelard à Bois de Feugères (Bouville) is a typical Beauceron pivot mill, entirely made of wood. Dating from 1796, it is a candelabra type windmill with canvas wings. You can visit it and grind wheat flour the old-fashioned way to take away as you wish. 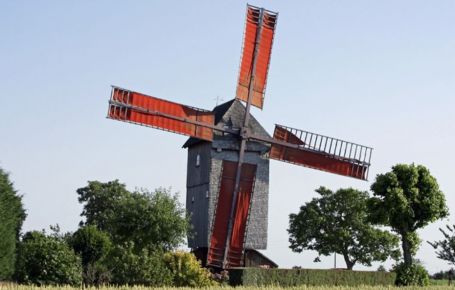 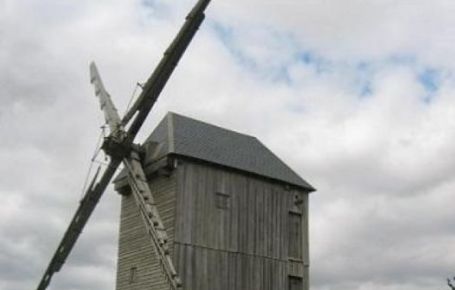